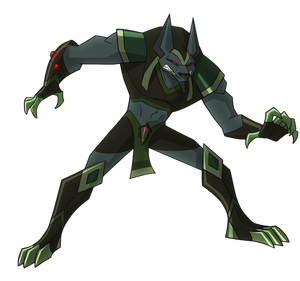 Anubi is a jackal-headed warrior, and a powerful shapeshifter. Anubi is one of Exaton's best seekers. He has the ability to make mental contact with Exaton whenever he needs to speak with his master. Anubi is in constant rivalry with Sekhmet even though they are allies.

Anubi is very bad-tempered and always eager for a fight. He is a competent tracker and spy. However, he is very skilled in the art of deception, like when he fooled once Neith into thinking he was Horus.

Despite the fact he is prone to letting his anger get the better of him, Anubi is also somewhat cunning. The warriors of the Golden Army as well as Leo, consider Anubi a serious threat.

Hypnosis beam: Anyone hit by them becomes hypnotized and will obey Anubi's commands. Used in episode 5, The Shadow of Exaton to try to get Leo on their side, but Anubi missed. 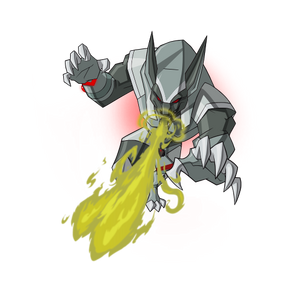