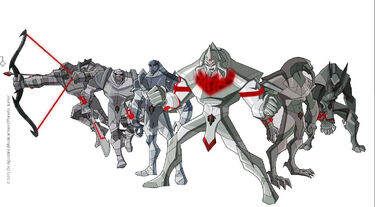 The Dark Army are the vicious enemies of Kefer in the Egyxos series. They are led by Exaton.

The Dark Army all share a thirst for power, as well as fierce loyalty to Exaton. The Dark Army's main base of operations was Exaton's Dark Pyramid.

The majority of the Dark Army consists of Mummy-like foot soldiers. These soldiers are most often give their orders from Exaton through one of his generals. Such as Hatanor, Karnak and Nakt.

It is unknown what happened to them after the return of Ra, though it is likely that they still follow Exaton even in his exile.

Known members of the Dark Army include: