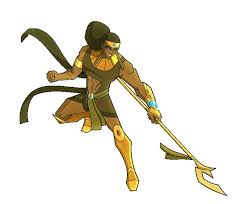 Hyksos is an intrepid and very intelligent man, he is also a talented warrior and an inventor. Hyksos prepares weapons and magical objects useful for everyday life; in his hands anything can become a weapon, so he is never disarmed and any object near him can turned into a weapon.

Hyksos is a quirky inventor. His curiosity and mechanical savviness makes him incredibly valuable to Kefer. Hyksos has a natural warmth and friendliness that makes everyone like him. He's very loyal to his friends and frequently goes out of his way to help them.

At the same time, Hyksos has his quirks. He sometimes takes what people say too literally. And often runs into situations without planning ahead. 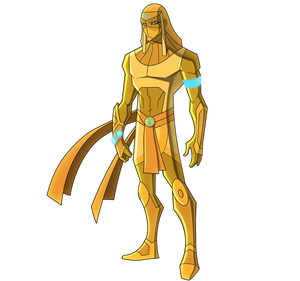 Hyksos has the ability to don golden armor possessing great power thanks to his bracelet. Doing so transforms Hyksos, much like the other warriors of Egyxos.

Retrieved from "https://egyxos.fandom.com/wiki/Hyksos?oldid=5557"
Community content is available under CC-BY-SA unless otherwise noted.