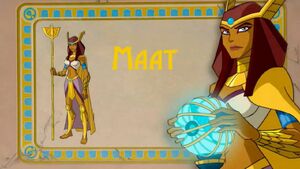 Maat is the fierce and slightly cold member of Kefer's Council of Regents. She assists the Pharaoh in governing over the kingdom of Egyxos. Maat is also a powerful Magic user.

Bes described Maat as being, made of stone and steel. She is quite and taciturn, though this hides her feeling of smug superiority.

Maat was considered one of Kefer's close friends, Bes also regarded her highly.

After many years Maat began to hunger for more power. She considered the people of Egyxos as beneath her and unworthy of her service. She eventually sought to rule over them instead.

Eventually she decided to side with Exaton. Acting as a spy and saboteur within Kefer's ranks, whilst still pretending to be loyal to Kefer. Using her position, Maat leaked vital intelligence regarding the decisions of Kefer and the council to Exaton.

Maat was eventually revealed as a traitor during Seth challenging Kefer for leadership. Thanks to the combined effort of the last Pharaoh Leo, Kefer and Seth. They discovered that her she had told Exaton about the challenge and her Feather of Maat. When confronted with the truth, Maat confessed and was locked away in a prison cell after she'd tried to flee.