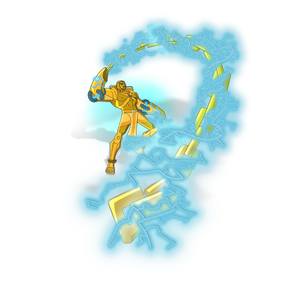 Magic is a common phenomena to the people of Egyxos. People like Maat and Sekhmet often use the ability to manipulation forms of energy, capable of generating a nearly untold and countless number of effects. The ability to cast spells varies widely and sometimes depends on the user. Some magic requires concentration and effort, while others need only a single command spoken aloud to work.

When Kefer and his warriors transform with the aid of their bracelets, they gain golden armor. While those who serve Exaton gain silver armor.

When Sekhmet uses magic, she often combines it with advanced technology. Osiride also uses technology that appears to run on magical energy. Magic powered technology is fairly common on Egyxos.

Retrieved from "https://egyxos.fandom.com/wiki/Magic?oldid=5611"
Community content is available under CC-BY-SA unless otherwise noted.