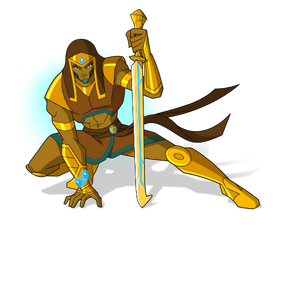 Ramses is a brave and loyal ally of Leo Walker. Ramses first meet Leo on Earth when he was in the guise of a human, Professor Kirby. He was under orders of Kefer to find the Bracelet of Rа and its newest owner.

Ramses is also a soldier for the Golden Army and knows that Leo is the last pharaoh from Earth and Egyxos.

Ramses is exuberant and confident in himself. He is very loyal to those he considers his friends and tends to talk big to his enemies, like Anubi. Once, while pretending to be Leo, he was shown to have poor table manners.