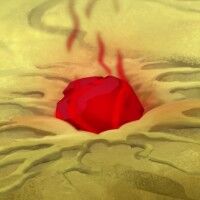 While the stone made Exaton virtually invincible, it also caused him great pain. It even caused him to feel immense rage, leading him to attack his own followers.

Working together, the Golden and Dark armies were able to subdue Exaton long enough for Leo to get close enough to remove the stone from Exaton's armor. Once removed, Leo flew the stone high into the air and destroyed it.