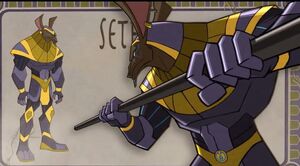 Seth is a grim and stolid member of Kefer's Council of Regents. Seth assists the Pharaoh in governing over the kingdom of Egyxos.

Seth was initially depicted as being at odds with Kefer regarding the defense of Egyxos. Though seemingly stoic to the point of being cold, he was never overtly cruel.

After Leo and Kefer had risked their lives to rescue him from Exaton, Seth showed gratitude and remorse, admitting he was wrong for not trusting them.

Retrieved from "https://egyxos.fandom.com/wiki/Seth?oldid=5483"
Community content is available under CC-BY-SA unless otherwise noted.