Shu is a sentient robot-like empty suit of armor given life though means of an unknown power source contained within a insertable throwing star shaped metal symbol in it's chest.

Shu was created by Ra from an unknown metal material and tasked as his “first warrior”, or protector and champion, of the kingdom of Egyxos and its people while they were still on Earth along with it’s human inhabitants of what would become ancient Egypt. Years later however; instead of fulfilling his duty to protect the peace and to enforce the laws Ra placed to promote that peace, Shu rose up against Ra and soon led a rebellion, which he saw as the only logical solution, in which he sought to rule over the people of both Egyxos and Egypt. This was caused due to Shu’s artificial intelligence evolving beyond the point where it eventually grew beyond his original programing. And due to his highly advanced artificial intelligence, it concluded that a being so advanced as it must be forced to submit in serving "inferior beings", as he put it, as illogical. After soon learning of Shu's rebellion, Ra then defeated Shu and condemned him for his crimes against the people of Egyxos and Egypt. Ra deactivated Shu by taking him apart piece by piece, specifically removing only the metal symbol on Shu’s chest that acted as Shu’s power source which also held Shu together, and then entombing those pieces in a secret crypt next to where the Great Pyramids of Giza are now. The tomb was then guarded under the Pharaoh's after the Egyxos people left the earth. Before he deactivated and entombed Shu, Ra took a single piece of Shu's armor from Shu’s right arm and from it created the Bracelet of Rа.

There Shu remained dormant and eventually was forgotten after the line of Pharaohs ended when Egypt was conquered by the Roman Empire for thousands of years in his prison/tomb. That was until the day some tomb robbers found the chamber where the dormant pieces were kept. Shu then was reactivated, when the throwing star-like metal object was placed back in his chest, and turned his liberators into mind-controlled puppets. Shu then boarded a Egyptian cargo ship and hypnotized the entire crew to take him to the city where Leo lived. While fighting with Leo, Shu tricked the Last Pharaoh into taking him to Egyxos to eliminate Ra’s sons when he learned that Ra disappeared after he was imprisoned and has not ruled Egyxos for centuries. When Exaton offered and alliance, Shu refused and attacked both him and Kefer. Leo, with the help of Neith, was able to defeat Shu which also scattered all of the robot’s pieces across the Egyxos desert. After the battle was over, Exaton had his army collect the pieces of Shu that had been scattered all over the desert.

Much later; Shu was fully reassembled by Exaton. Who had Sekhmet reprogram Shu to obey his commands, though Exaton soon lost control and again failed to control the mighty robot. In order to defeat Leo, Shu attempted to take his bracelet by threatening innocent bystanders. His plan seemed to work, until Leo revealed he'd used Shu's own arrogance against itself. Causing the robot to accidentally destroy itself as it stepped into the portal to Egyxos. 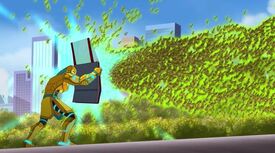 Shu possess a variety of powers and abilities. Shu possesses a large number of mechanical insects which he can use to overwhelm his enemies in a massive swarm. Shu can also generate and manipulate wind and air currents which he can blast back opponents or use to propel himself close to attack his opponents at great speed. He can also use said wind/air manipulation to create whirlwinds, hurricanes, tornadoes, and sandstorms to scatter, isolate, and blind his opponents.