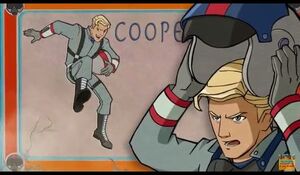 While flying his craft during a routine flight, Cooper arrived in Egyxos, through an accidentally created tear in reality. When Captain Cooper landed he quickly discovered that he was no longer on Earth.

Cooper's arrival in Egyxos did not go unnoticed. Cooper was soon captured by Exaton's men. When brought before Exaton himself, Cooper remained defiant until he had to chance to escape. He was nearly captured again, but Leo Walker and his friends arrived to rescue him.

A plan was devised to return Cooper to Earth: a magical device placed within his plane would allow both it and the pilot to return to Earth and close the tear in reality. The plan worked, and Cooper and his jet safely made it back to Earth. The other effect of the magical device erased "most" of Cooper's memories of what had happened. Though Cooper had gained a sudden interest in taking a vacation in Egypt.