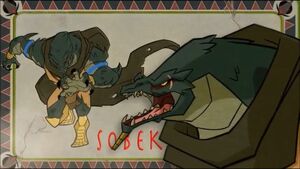 Sobek is the crocodile-headed humanoid. He is faithful to Exaton even though he was once a follower of Kefer. Sobek was convicted of treason and locked away in prison for many years. Sometime after his imprisonment he managed to escape.

Sobek is one of Exaton's more intelligent and capable followers. Despite his brutish appearance, Sobek is often soft spoken and thoughtful when he speaks. While strong and not cowardly, he often tries to outsmart his opponents rather than outfight them.

Though he has a temper, Sobek apparently does not like to harm children. This is best shown when he had Bastet's young daughter Kira in his custody. Instead of keeping her in a cell and ignoring her, he attempted to bribe her into cooperating by giving the girl her favorite foods.

Retrieved from "https://egyxos.fandom.com/wiki/Sobek?oldid=5480"
Community content is available under CC-BY-SA unless otherwise noted.